Big Dream of a Little One 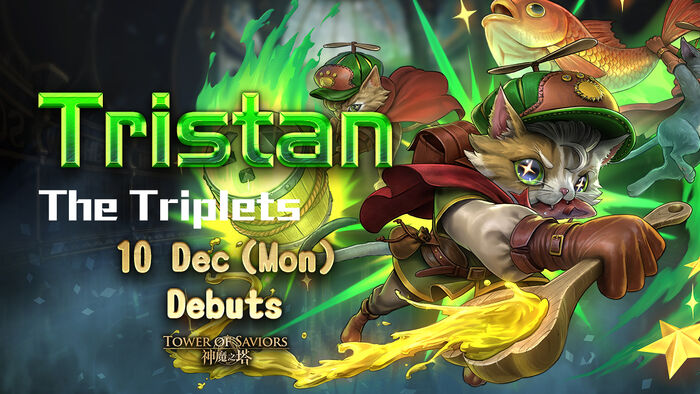 Tristan: “Speaking of great achievement, of course it’ll be joining the police force!”

Tristan: The fitness test is too easy for me!

【Before Battles】
Tristan was tied to the overwhelming canine coworkers in his first day at work.

Police Dog A: Tristan, here you go! You need to eat more bones to grow bigger!

Tristan: NO! This is so gross!

【Before Battles】
Tristan was on patrol with the police dogs, and they came across with a thug. When Tristan was about to catch him, the dogs barked vigorously and dashed to the target. Tristan covered his ears right away.

Tristan: Meow! I can’t stay focused with all these barks!

【After Battles】
The thug was arrested very soon. The dogs were so excited, jumping up and down, pouncing on each other. Realizing that he couldn’t fit in, Tristan left without leaving any notice.

☆ Team consisting of only Demon members

Endings of the Triplets - Extra[]

【Before Battles】
Tristan ran into the both dejected Biggie and Twinkle on his way back home.

Tristan: Looks like we’re all failed in the new job...

Triplet: You mean “how about going back to the gang”, right?

The triplet, who had a taste of new life, eventually returned to the big warm family, returning to the kind of life that was less important than the leads, but slightly busier than a nobody.

Start of something new - Elite[]