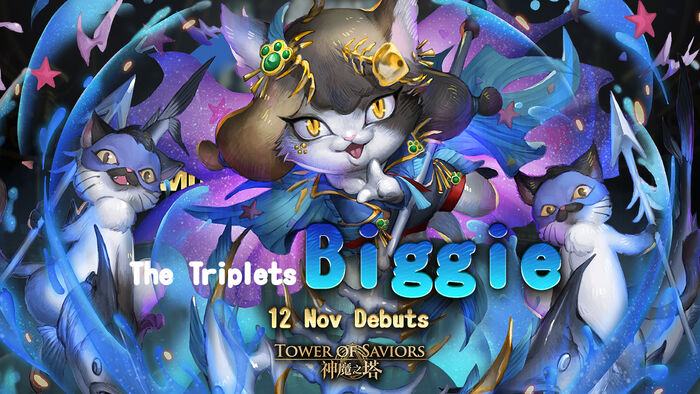 First time clearance of Spotlight of Stage - Advanced is rewarded with

Biggie: Twinkle, Tristan, as the leader of the triplet, I have a great announcement to make!

Tristan: You wish! Look at her rising tail. She wants us to do dumb things.

Biggie: If we couldn’t make use of our talent in the gang, then let’s go somewhere else!

Biggie: “Staying in the gang is a waste of my potential. I can do much more than that. Maybe opportunities will knock on my door if I go out for a walk.”

Talent: The feline lady over there! The graceful movement when you walk is just right for modelling!

Talent: We’re the leading company in the modelling business, and our insight is always right. You’ll be famous. Join us!

Biggie: “Oh! My talent has just been discovered!”

Biggie: I’m gonna shine like a diamond on the stage. Goodbye the gang!

The showcase was a full house. Every guest was looking forward to Biggie’s performance.

Biggie: “Meow! Too many audiences! Oh crap, nervous stomach just kicked in. I need the washroom!”

【Before Battles】
The anxious Biggie stumbled on the stage, tripping the other models. She even broke the stage setting.

: You ruined the whole show! Never expected that you had social phobia. This is my first time to be wrong. Leave!

Biggie: “Boohoo~Modelling is tougher than I thought…”